Beyond all Dreams - Book Review 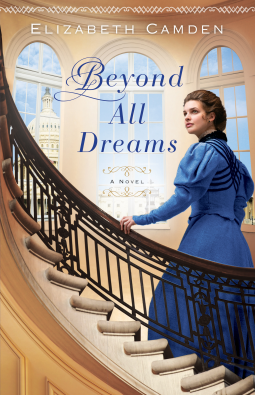 Anna O'Brien leads a predictable and quiet life as a map librarian at the illustrious Library of Congress until she stumbles across the baffling mystery of a ship disappeared at sea. Thwarted in her attempts to uncover information, her determination outweighs her shyness and she turns to a dashing congressman for help.


Luke Callahan was one of the nation's most powerful congressmen before his promising career was shadowed in scandal. Eager to share in a new cause and intrigued by the winsome librarian, he joins forces with Anna to solve the mystery of the lost ship. Opposites in every way, Anna and Luke are unexpectedly drawn to each other despite the strict rules forbidding Anna from any romantic entanglements with members of Congress.

From the gilded halls of the Capitol where powerful men shape the future of the nation, to the scholarly archives of the nation's finest library, Anna and Luke are soon embroiled in secrets much bigger and more perilous than they ever imagined. Is bringing the truth to light worth risking all they've ever dreamed for their futures?

This is a delightful story of a time when our nation was still beginning its climb to being a world power.  Our nation was still stinging from the War Between the States.   It had only been 40 years since that awful time.  Veterans of that war were still around.  And now America was facing a challenge with Cuba and Spain.

Anna is quiet and shy.  She had had a difficult childhood.  She just wanted to study and archive the maps in the Library of Congress.  Anna was very proud to be one of the few women employed in such a capacity.  She had her best friend from childhood, she had the maps, and she had her life all worked out.  Then, she met Luke Callahan.

She stumbled across a report about a ship her father had been on.  She realized there was a mistake and sought to have it corrected by the Navy.  That's when her life turned on its ear.  She had found a secret that needed to remain a secret no matter how painful.  Luke endeavored to help her but had his own demons to handle as well.

As little as they had in common on the surface, Luke and Anna were very much alike after all.  Both had a love of books and learning, love of family, and a sense of pride in their occupations.  Leaning on each other and their faith, they were able to make it through to the other side of all their hardships.

This is a wonderful story about learning to trust, learning to love, and continuing to have faith no matter the circumstances.  Though we have hardships and may travel a rough road our friends and loved ones will be there for us.  I enjoyed the suspense of finding out the mystery Anna had found.  I would recommend this book to anyone!

**Disclaimer: This post may contain affiliate links and/or links to outside sites. By clicking on an affiliate link it is at no cost to you and helps run/maintain this blog. Posts for reviews are my own opinions and no additional compensation is given unless otherwise stated. Giveaways on this blog are under the discretion of the host of the giveaway.
Posted by Unknown at 10:10 AM