Head on over to Taking Time for Mommy to get your entries in for this gift card giveaway!  Get all your back to school needs in one place.  Good luck! 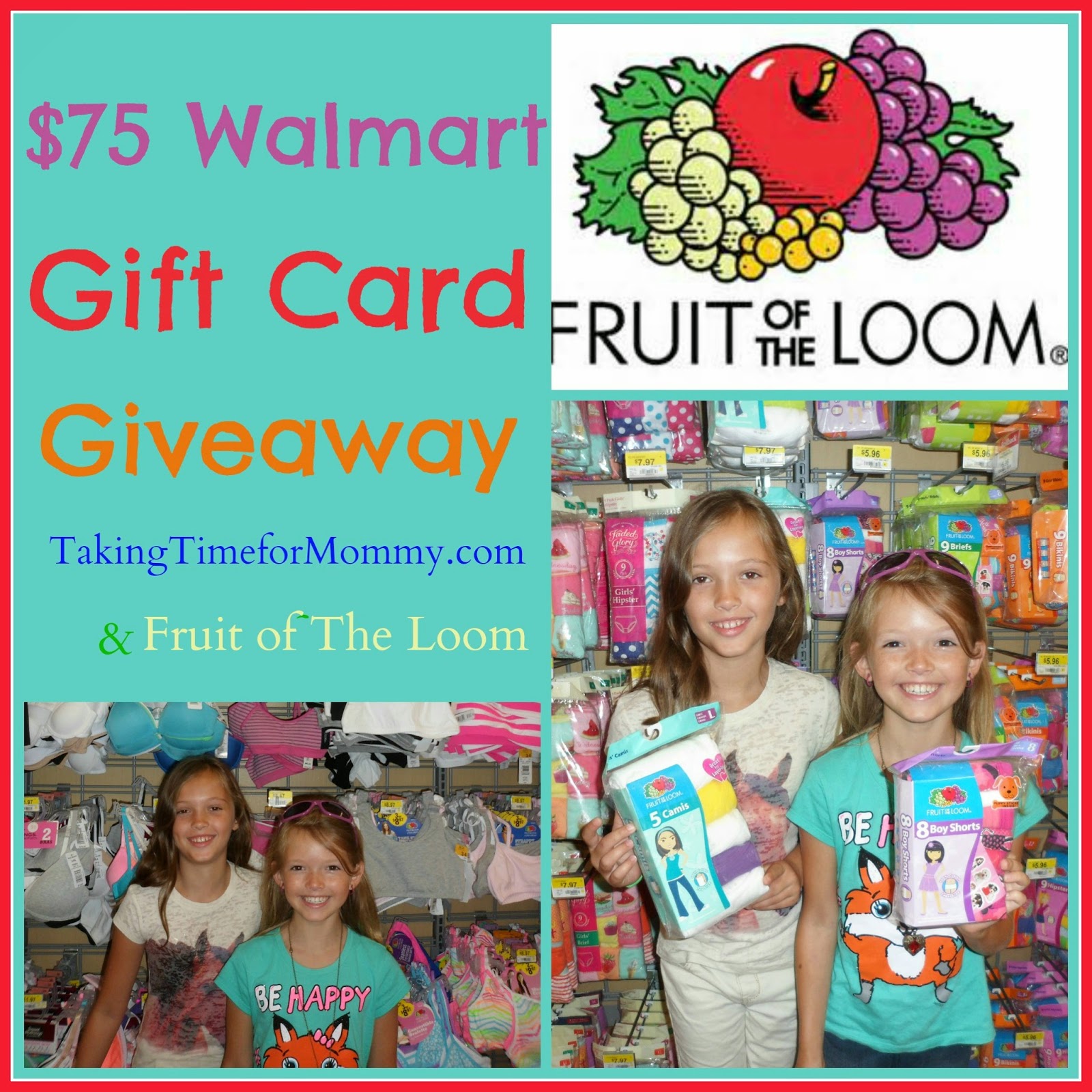 Fruit of the Loom, Wal-Mart, and Taking Time for Mommy are giving one lucky winner a $75 electronic gift card.  Fill out the form below to enter.


**Disclaimer: This post may contain affiliate links and/or links to outside sites. By clicking on an affiliate link it is at no cost to you and helps run/maintain this blog. Posts for reviews are my own opinions and no additional compensation is given unless otherwise stated. Giveaways on this blog are under the discretion of the host of the giveaway.
Posted by Unknown at 9:48 AM 7 comments:

Labels: back to school, fruit of the loom, gift card, giveaway, walmart

Awesome!  Here are two giveaways you can enter.  My friend over at The Deals and More is running these giveaways until Saturday.  Good luck!

You can read The Deals and More full review HERE

You can read The Deals and More full review HERE


**Disclaimer: This post may contain affiliate links and/or links to outside sites. By clicking on an affiliate link it is at no cost to you and helps run/maintain this blog. Posts for reviews are my own opinions and no additional compensation is given unless otherwise stated. Giveaways on this blog are under the discretion of the host of the giveaway.
Posted by Unknown at 10:34 PM 3 comments:

In an era of genetic engineering, Lieutenant Henry Gallant is the only Natural (non-genetically enhanced) officer left in the fleet. Many of his superiors, including rival Anton Neumann, have expressed concern he is not up to the challenge. However, his unique mental abilities have proven essential to the defense of the United Planets in its fight against the Titan invaders.

Serving on the first FTL prototype, the Intrepid, on its maiden voyage to Tau Ceti, Gallant finds a lost colony on the planet Elysium. Cyrus Wolfe and his son, manipulate planet politics against the democratic opposition led by James Hepburn and his granddaughter Alaina. Wolfe has allied himself with an ancient Artificial Intelligence which had lain dormant on the planet for millennia, but is now willing to protect the colonists against the Titans.

With Alaina’s help, Gallant discovers the ancient AI has a sinister ulterior motive and he matches his unique and exceptional mind against the complexity of machine intelligence to escape the ultimate trap and prevent the extermination of humanity.

In Lieutenant Henry Gallant, one man pits the naked human mind against the perspicacity of machine intelligence.


Fire retros, thought Gallant, prompting the Hummingbird to fall from its vertiginous orbit.


The tiny ship’s battle scars reminded him of what he was leaving behind, but he quickly dispelled his momentary sense of isolation. Instead, he focused on his mission to a new world. He let Elysium fill the viewport as well as his imagination. The fulsome imagery blended with his neural interface receptors, producing a heightened awareness. Optimistically, he resolved to enjoy the eight minute ride to the landing strip at the outer edge of the town.


He had grown up on terra-formed Mars and never visited Earth. Now as he plunged downward toward the aquamarine water, he could appreciate its novelty. The craft penetrated the atmosphere and passed through the dotted white clouds with the sun reflecting off its polished surface.


When the Hummingbird pierced the stratosphere, the hull creaked from strain,
alerting him to the many and varied external noises—a startling change from the
formal silence of deep space. Buffeted by solar winds and the air pressure of the ionosphere, the ship’s metal fabric added vibrating noises.


He listened to a cacophony of thunderous rocket engines bellowing as fuel gurgled into the nozzles and then exploded; fierce winds howled as they chafed against the heat shield, and a rhythmic plink of particles struck the hull.


Performing a wingover helped to stabilize the fuel mixture and to distribute the heat more evenly. The maneuver caused the planet to swirl around in his viewport, adding a visual spectacle to trump the auditory repast. The sunlight accentuated the blue skies, the vibrant blue-green oceans, and the orange-red horizons. These soon gave way to the planetary features of numerous islands with rugged brown-gray mountains and burgeoning green forests. The islands dotted the expansive ocean teeming with life from multicolored birds to herds of mammals roaming free.


The largest island in the main chain was the eastern most, which sported a gigantic volcano on its northern peninsula. Gallant had seen volcanoes on the various moons of Jupiter. They featured spiraling conical peaks and deep sprawling ravines, but the one below him dwarfed them all. His home planet, Mars, featured the largest volcano in the solar system, but before his eyes was one even larger.


A final crescendo was reached when the Hummingbird thudded to a jarring
stop on the landing pad.


While he unstrapped, the AI reported, “The atmosphere is breathable with twenty per cent oxygen content. Indications are the plant life has many similarities to Earth and the ocean is rich in photosensitive plankton. Testing of voluminous bacteria and virus strains is underway and a list of dangerous pathogens will be updated continuously as you travel through the environment.”

Book Reviews for Volume 1:
Past Reviews of the first volume: Midshipman Henry Galant @2013

"The author has created a wonderful piece of work with his first novel in the Henry Gallant Saga. Between Henry Gallant beginning his new life on the United Planets' battle cruiser Repulse and trying to save the world the author has came up with it all. Henry Gallant is an admirable character with many wonderful features such as courage, intelligence, humility, kindness and special powers. ... the odds stacked against him pretty high. But maybe through it all, Kelsey will see the remarkable things about him." Ashley Patts, Teenage Rush teenagerush.blogspot.com

"This story moves along at a swift pace, with interesting character development and plot surprises. The characters are complete and engaging. This could develop into a good series." Rae

"Its style and flavor reminded me of The Lost Fleet series by Jack Campbell." - JJH

"Space Opera at its finest. Rousing read, introverted young man against impossible odds, a girl to win or lose, an enemy or is he? Way too much fun...can't wait for the next one." - vrzepka

As a scientist and author specializing in technology innovation, H. Peter Alesso has over twenty years research experience at Lawrence Livermore National Laboratory (LLNL). As Engineering Group Leader at LLNL he led a team of computer scientists and engineers in innovative applications across a wide range of supercomputers, workstations and networks. He graduated from the United States Naval Academy with a B.S. and served in the U.S. Navy on nuclear submarines before completing an M.S. and an advanced Engineering Degree at M.I.T. He has published several software titles and numerous scientific journal and conference articles, and he is the author/co-author of seven books.

Enter to win a $50 Amazon Gift Card from the Author

**Disclaimer: This post may contain affiliate links and/or links to outside sites. By clicking on an affiliate link it is at no cost to you and helps run/maintain this blog. Posts for reviews are my own opinions and no additional compensation is given unless otherwise stated. Giveaways on this blog are under the discretion of the host of the giveaway.
Posted by Unknown at 1:00 AM No comments: