Murder at the Mikado - Book Review 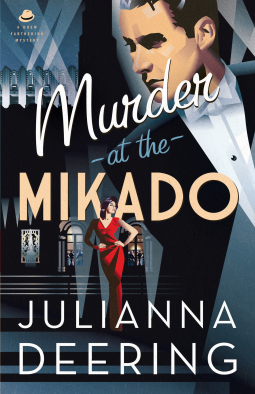 When a celebrated ACTOR IS FOUND MURDERED IN HIS DRESSING ROOM, all signs point to Drew's old flame. But behind the curtains nothing is what it seems and this quickly becomes his MOST puzzling case YET.

Just as Drew Farthering thinks his life has calmed down some, Fleur Landis, a former girlfriend, reappears, in dire need of his help. She's married now, no longer an actress--but the lead actor in her former troupe's production of The Mikado has been murdered, and Fleur is the police's number one suspect.

Drew would rather focus on his fiancée, Madeline Parker, and their upcoming wedding, but he can't leave Fleur and her family in the lurch--even if she did break his heart once. As Drew, Nick, and Madeline begin investigating, they discover more going on behind the scenes of the theater troupe than could ever have been imagined. It seems nearly everyone had a motive, and alibis are few and far between.

Both the murder case and the presence of the beautiful, exotic Fleur put a heavy strain on Drew and Madeline's relationship. Will their still-young romance survive the pressure?

This was a fun book to read.  Murder, mystery, adventure, love, betrayal...  All that good stuff.  I enjoyed this story very much.  I'm so glad I had the opportunity to review it.

The main male character has a past of which he's not too proud.  It comes back to haunt him not long before his wedding.  A beautiful mistake he made when he was young, has surprised him and come back into his life.  But little does he know what trouble is lurking in her wake.

The only bit of issue I had was time shifting.  While reading you are finding out what had happened and then suddenly you're in the present.  It's not immediately obvious that a shift has happened.  Other than that the story reads fairly smoothly.

I very much enjoy historical fiction and I certainly enjoy reading books with little to no foul language or adult scenes.  It's a nice change really.  I look forward to finding out more what happens in the life of Drew Farthering, the main character.

Julianna Deering has always loved British history and literature and is particularly a fan of the classic mysteries written by Dorothy Sayers and Agatha Christie. She graduated from the University of Texas at Dallas and now works for an attorney specializing in wills...

**Disclaimer: This post may contain affiliate links and/or links to outside sites. By clicking on an affiliate link it is at no cost to you and helps run/maintain this blog. Posts for reviews are my own opinions and no additional compensation is given unless otherwise stated. Giveaways on this blog are under the discretion of the host of the giveaway.
Posted by Unknown at 8:41 PM