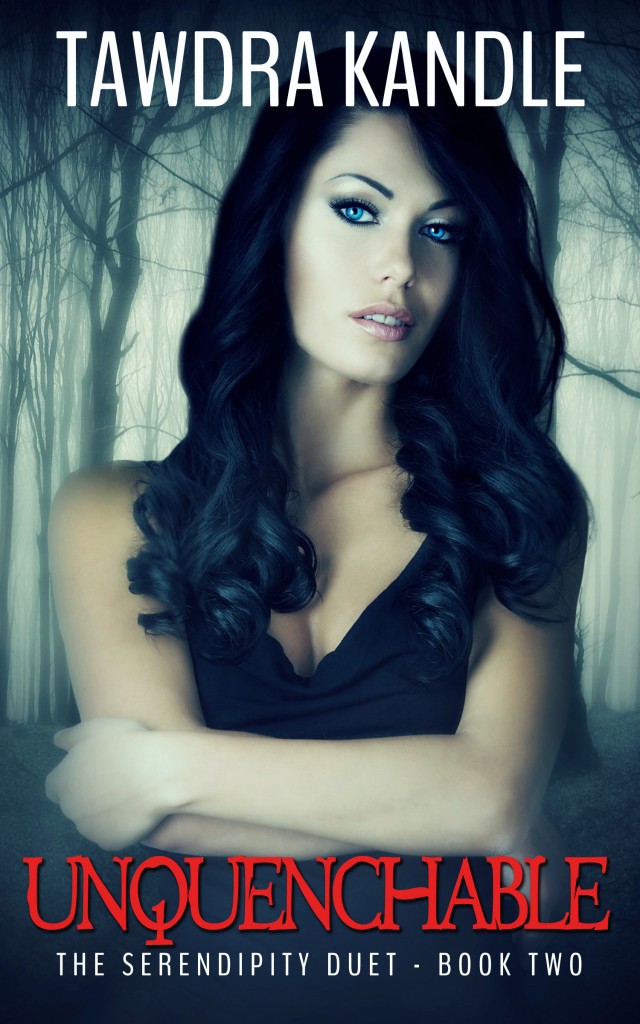 Nell Massler is a powerful witch from an ancient magical family. Before she was eighteen years old, she attempted murder—not once, but twice. Committed to a psych ward, she tried to right her wrongs and almost lost her life.

While she’s deep in a coma, Caruthers Initiative Institute develops a vested interest in waking Nell—and offering her a chance at redemption.

Nell is given a fresh start in exchange for saving her fellow agent, Rafe Brooks. Keeping him alive and in hiding will require every ounce of her extraordinary abilities. Not falling head over heels for the sexy mind manipulator will take a miracle.

It's when they uncover a plot to destroy the world that Nell will be put to the test... will she choose Rafe and to do the right thing? Or will she succumb to the temptation of evil yet again?

Buy it on Amazon/Barnes and Noble/Smashwords

This is a true reader interview, all questions sent to me by my readers, who rock my socks daily.

First, a little introduction: I’m a wife, mom of four, mother-in-law of one. I have five cats (yes, you read that right) and one sweet puppy dog. I live in central Florida, where I write books, homeschool the last kiddo at home and enjoy the sunshine.

I write romance in many forms: Young adult, New Adult, Adult contemporary, and paranormal romance. My first four books made up the YA quartet The King Series. My current release, UNQUENCHABLE, is the second book in The Serendipity Duet, which is an NA spin-off from The King Series.

This question was sent to me tongue-in-cheek by a fellow author, but it made me laugh and reminded me of a story. My oldest daughter is a speech pathologist in a middle school, and she often recommends my books to her students. (My YA books, that is. Ahem.) Once a student handed her a piece paper with a phone number with the instructions to ‘Give this to your mom, so she can give it to Justin Bieber the next time she sees him.’ She wouldn’t believe that I don’t habitually hang with the Beebs. So to clarify, no, I don’t spend my time hanging out with anyone super-famous. I am fortunate to have met some really fabulous fellow authors, and some of the big names even answer me on Facebook or Twitter. But that’s as exciting as it gets.

Where do you find the time to write when you have a family?

I do have a family, but happily, they are at the point where they are pretty low maintenance. My daughters are 18, 22 and 25, and my son is 13. So they do more to help me than to slow me down. I do spend a good deal of time working and writing at night, when everyone is in bed. As I sit here now, it’s after midnight and the house is quiet. There’s a pup at my feet, one cat at my head and two more nearby. Everyone is sleeping. I also try to maximize my time by writing in waiting rooms and in the car while my son is in science class. . .I didn’t start publishing until my children were older, so I am in awe of the young writers I meet who have little ones. I couldn’t have done it!

I started writing when I was very young. I don’t remember specifically what I wrote until I was in fourth grade. I had just moved to New Jersey after living in California and Pennsylvania. I moved to a school where everyone knew each other, and I was the odd girl out. I spent a very lonely year, and one of the ways I coped was by making up stories to entertain myself on the walks to school or on the playground. I know I wrote some of them down, and I remember submitting something to Harper and Row. I was ten! In middle school, I won a short story contest, and my librarian sent it to A Child’s Life magazine. They published it.

I don’t know about gift, but I knew I had a passion for it early on. Writing was cathartic and necessary.

I usually know what I’m going to write a year out. Sometimes another book will pop up and need to be written, but by and large, I know what is coming when. When I have an idea, I sketch it out in a few paragraphs that don’t need to be formal or edited: they just contain my skeleton plot. Most of the time, I write from the beginning and just keep going. Sometimes, once I get over half-way in, I’ll write the ending and then go back and make everything come together, but I haven’t done that since the last King Series book.

I also self-edit as I go along. When I start writing for the day, I go back and read the last pages I wrote, which helps me with continuity and consistency.

I don’t have any special places to write; I can do it at my desk, in my favorite green recliner, in the car while kids are at class, sitting on bleachers during baseball practice. . .you name it. But when I’m getting to the end, I usually retreat to my bed and finish there.

Do you set a writing schedule? How do you write so many books this quickly? Do you sleep?

I wish I had a set writing schedule. That’s the dream. But since I live with other people who have needs, my writing schedule mostly looks like this: write when I can, whenver I can, as long as I can. Late nights are a given. When I’m deep in the process, I pretty much ONLY write. My family knows that during those days, they can’t count on me for meals or anything else, and that even if I’m physically present, I probably am not there mentally.

I’m part of Romantic Edge Books, and we have a group commitment to a certain frequency of publication. That helps keep me on schedule. And even if I’m not actively writing, I’m always thinking of the current book. When I can’t sit down to write, I listen to the book’s play list, I think about what comes next, I let scenes play out in my head. . .it’s always going on.

Have you ever started writing a book with a rough plot in mind and then totally changed it as you were writing?

Not a plot, no. There are always twists and turns that surprise me, definitely. And some characters just insist on their own way. When I was writing The Posse, a situation arose that I just did not see coming. . .but it was huge. And Nell had different ideas in some parts of UNQUENCHABLE. My biggest goal is to stay true to the characters and their personalities. I think one of the worst writing mistakes is to force a character into an action or situation just for the sake of a plot twist.

When are you going to write your next book...that's what I want to know!

I’m always working on something. At the moment, I’m writing Ava’s book, JUST DESSERTS, the second installment in the Perfect Dish Duo. Since I write a variety of genres within the larger romance category—YA, NA and Adult, both contemporary and paranormal—I try to switch things up. Since I just did two paranormal books, I’m happy to be back in the contemporary world again. . .but I know once this one is finished, I’ll be itching to get back to my supernatural characters again.

After JUST DESSERTS, I’ll be working on the first book in my adult paramystery series, Recipe for Death. That’s the series title; I don’t have a name for the first book yet. Cathryn will be a featured character in these books, and Rafe and Nell will make appearances. If you’ve read my short story STARDUST ON THE SEA, you’ll be familiar with the male lead, Lucas.

Where do you get the energy to attend as many conventions as you do?

The convention season is just winding down for me. I have Romantic Times in May in New Orleans, and then Indie BookFest in Orlando in August, but other than that, I plan to be home. As for the energy. . .they are exhausting, but I so enjoy meeting readers and other authors that I find them totally worth it. It was fun to get to know readers from all over in Savannah, Daytona, Charleston and Atlanta this year. . .if you were there, I’m waving at you now!

Did you ever think that Rafe would have this big of an impact with your readers?

No, Rafe was supposed to be just a sub-character who came in to tempt Tasmyn. . .I was really surprised when he was so appealing. He was only supposed to be in one book, BREATHLESS, but he was just such a perfect foil for Michael. . .he stuck around.

In RESTLESS, Rafe blew me away. He loved Tasmyn, or he thought he did. There was a connection there. It was actually while I was writing that book that I realized maybe I was ready to move away from YA. Rafe was definitely ready to take things to another level!

So I promised Rafe his own book. I didn’t know where it would go, or what it would be about. I wasn’t sure about his love interest. It wasn’t until I was writing ENDLESS that I realized there would be a connection with Carruthers, and that made sense. He took it from there.

Everyone loves Rafe. Or nearly everyone. Michael is a favorite, for sure, but poor Michael. . .we have only ever seen him through Tasmyn’s eyes. He’s really not as annoyingly perfect as she makes him seem. Someday I may write a short story from Michael’s POV just so we can get a more balanced take on him.

Anyway, though, Rafe is so much fun to write. And to read.

What's next for Rafe?

As I said, Rafe wasn’t supposed to move beyond The King Series. And then I gave him The Serendipity Duet. But he’s still not satisfied. So yes, there will be more Rafe and Nell books. He has more to do. . and his relationship with Nell is complicated. They both have a lot of history.

And of course, as I said, he and Nell will also appear in Recipe for Death, my adult paramysteries.

What other series and/or spin-offs do you have planned?

Next comes JUST DESSERTS, the second book the Perfect Dish Duo. And then Recipe For Death, the adult para-mystery series. And then we’ll have THE LAST ONE, a new adult Crystal Cove book featuring Meghan, the daughter from THE POSSE. The Crystal Cove books are not necessarily a series, just books that feature some character overlap and take place at least partly in Crystal Cove, Florida. And then we’ll start looking into Rafe and Nell’s series.

**Disclaimer: This post may contain affiliate links and/or links to outside sites. By clicking on an affiliate link it is at no cost to you and helps run/maintain this blog. Posts for reviews are my own opinions and no additional compensation is given unless otherwise stated. Giveaways on this blog are under the discretion of the host of the giveaway.
Posted by Unknown at 8:26 AM